Pindrops system with an "Amazing" twist! 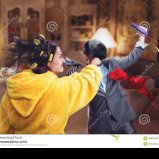