forum game Do you know any jokes?

The Tomato Garden An old gentleman lived alone in Kansas City. He wanted to plant his annual tomato garden, but it was very difficult work, as the ground was hard His only son, Vincent, who 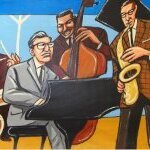 THE CHAUFFEUR A young man with walked into the local welfare office to pick up his check. He marched up to the counter and said, "Hi. You know, I just absolutely hate drawing welfare. I'd re